Mike tried to control multiple gopros with an app on his phone, but that didn't seem to work. Do we need wifi remote?? Gopro sells a smart remote that can control 50 cameras at the same time. 85 Euro seem a bit expensive though... For our first test we will just manually press all the buttons :-/ 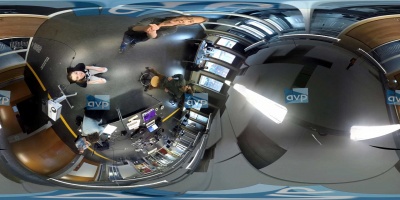 Stitched with the trial of Autopano Video 2.0

This is a bit fiddly, but once it's working it plays very nice! We're using Kolor Eyes to play the 360 video and view if on the Oculus Rift (DK2). I didn't get it to work yet on a windows pc, but it plays smooth on the Mac Pro after following these tips and tricks. Much better then expected!