Then, the Steinhart-Hart equation is used to convert the resistance of the thermistor to a temperature reading. 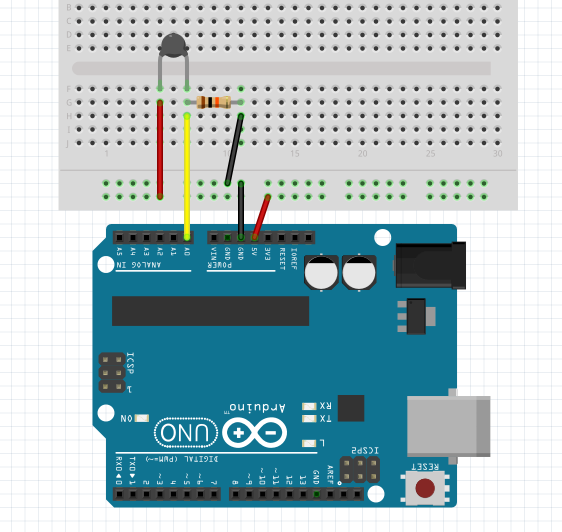 And then Beam said:

Yes if you have the right thermistor, you can copy the script and it works (sort of, see later...). But then I bought another NTC sensor, connected it and it gave a wrong reading.

It was a real NTC thermistor, bought at Conrad a long time ago, but Conrad didn't sell it anymore: TTS2B502F39D3RY.

What to do? These numbers c1, c2, c3 are not something you can fiddle with just like that...

On another site of Conrad the datasheet was still to be downloaded, although the part was not available anymore.

But this datasheet didn't explain anything. So I had to understand something more, which is difficult if you only want to copy paste a script and preferably don't think too much.

So I found this site explaining:

Going back to the datasheet I found this B value they are talking about in this link: for this NTC the B = 3935 - from this big table: (find the B502 line)

Looking at the graphic:

I somehow understood this T0, room temperature, 25 degrees constant of 5K Ohm. I measured the resistance to be around 7K for 16 degrees, so this fitted. Be careful, because the temperature scale is "lineair" and the Resistance is "log" scale, so you cannot fit the behavior of the thermistor linearly, by measuring 0 degrees and 100 degrees and interpolate using a simple formula. (I did this a few years ago....wrong!!!)

Above is mentioned the Steinhart formula...indeed, but then not yet the script version....

You have to work this around, getting the T from the measured resistance, and the resistance from the voltage divider (hardware, connected to the microcontroller).

So....we have to do some equation acrobatics

For the script then, we need coding this last line - calculating the last T = ... formula, the following script calculates first the constants, Kelvin to Celsius etcetera, then the final verdict:

You can see that they follow the formula, getting the constants in programming script.

But then the reading of my NTC got the wrong way, going down if warming up.

So I had the initial voltage wrong, instead of:

I had to do it reversed:

adding this line in front:

So now we have something comparable to the c1, c2, c3.

But wait, we have more!

This script is really showing more than the c1,c2, c3 from above.

First of all, I can insert the real value of the second resistor in the voltage divider: 9.7K instead of 10K:

Also the adafruit page explains about self heating of the sensor. You should ideally put it of, only put it on during measurements. This is not in the script.

Concluding: without the datasheet, and finding the right values for the part, and the explanation, you cannot do much.

Sometimes you have to spend a few hours or more digging deeper than just copy paste a script.

This hurts, it is called learning...terrible.....