About the Knitting Machine

About the Knitting Machine 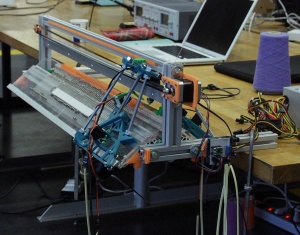 OpenKnit is a project by Gerard Rubio on creating an open source knitting machine.

The latest machine is called “Wally 120”. In its current form, it is able to knit tubes in one color.

This machine can be found at the interaction station of the Willem de Kooning Academy. It was built winter 2014 by students in a workshop with Gerard at the TU/E , in collaboration with De Waag.

The source files can be found at http://www.github.com/g3rard/openknit

At the interaction station, we created a max patch for controlling the machine. This can be found at http://www.github.com/openknit-max

Thomas and Yoana are the instructors who have been most working with the machine. They are the ones to contact if you want to work with it.

How to use the knitting machine

More on the machine