Micropython is a hype!

Micropython is a programming language for microcontrollers, like C, C++, Java, Code Blocks.

Why MicroPython???? Micropython can be seen as "a conversation with the microcontroller".

You can send it command using code, and it will immediately talk back. You can change a line of code in a program and the change is immediately incorporated.

So you can test sensors directly. Look at the values coming out of the sensor without a program.

Maybe this is why everybody wants micropython, why it seems to be a hype.

Micropython needs disk space on the microcontroller (or around on the board): 60K

The Arduino doesn't "talk" micropython. Its memory is too small.

You can also say: Micropython is too big!

Uploading to the ATmega328, or comparable always cost time, even for the slightest change in code: compiling and flashing. The memory is always first erased, before putting the new code in.

The code stays on the board.

The file is nicely saved in the Arduino Sketch folder

The program is not always saved on the microcontrollers. It is when you drag the file into the disk visible in your laptop.

In the MAIX dock editor you have to specifically tell the editor to store the code on the microcontroller.

Online code editor in python for the BBC Microbit: in Chrome (not in Safari or Firefox): https://python.microbit.org/v/2.0. Errors are displayed on the microbit.

I have bought and tested these boards myself.

All these boards can also be programmed using the Arduino IDE, except for the microbit

When you load too many libraries on the micro python "disk", you get this error:

This means that for a real micropython program two sensors can be too much, while if you program the same thing in Arduino IDE on these boards it only is 22% of the memory space.

These two images are for the same purpose: connecting a BME680 and a LIS3DH sensor to the Feather M0 datalogger.

With these last boards you can add two sensors without any problem.

For Arduino finding the library for sensors is easy, the sensor is practically sold - with the library.

I have used these libraries also for Sparkfun sensors if the sensor type is the same, for instance the LIS3DH.

Because the disk space must be bigger anyway, the boards come with extensions, like LCD screens and camera's, or extra programming facilities like micro AI: TensorFlow.

MAIX Dock has a mic array, a ring of six microphone and neopixels, which can indicate the direction of the sound: https://www.seeedstudio.com/Sipeed-6-1-Microphone-Array-for-Dock-Go-Bit-p-2875.html

At the same time the display which comes with the MAIX Dock displays also the direction of the sound: https://www.flickr.com/photos/contrechoc/49403059642/in/dateposted/

The Adafruit Circuit Express comes with 8 neopixels and a microphone, acceleration sensor.

The Sparkfun Edge comes with tensor flow. It can do speech recognition, although the results are poor...

These advanced boards - compared to the Arduino board with only the built in LED 13 are really different personalities, they can do different things, use different built in possibilities.

More about special boards on this page SpecialBoards - talking about boards independent of the language.

Join a microbit with a sound board in 1 second (you have to buy this sound board):

You can make sounds, tones, a melody 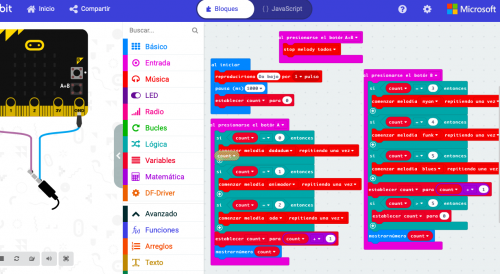 But using microphyton: You can use speech. https://microbit-micropython.readthedocs.io/en/latest/speech.html Just insert 1 line of code: import speech and start talking.

Sure, this is a poor machine voice, but still... And you can edit your program in the mu-editor and upload it without dragging the file in the micropython disk.

I don't think this can be beaten using an Arduino and a self soldered speaker, although it can be done (for instance: https://www.youtube.com/watch?v=krFOc7AwaKI)

Of course there are also other way to program these boards, Arduino IDE was already mentioned.

BBC Microbit and Adafruit Circuit Express can be programmed using the online Code block Editor: https://makecode.adafruit.com/#editor, which then can be changed in JAVA easily within this editor.

So... Arduini IDE or MicroPython?

For me that depends.

To get the mic_array working, giving me a direction of sound, I will use the 13 lines of code in MicroPython (- but where can I get the setting changed?)

To get the speech machine voice: yes immediately the micropython speech!

For making the sensor networks, with cheap Pro Minis I will use the Arduino IDE.

For exploring other languages and sometimes study deeper structures, or get a vague idea of Makefiles, I will use C++ environments. 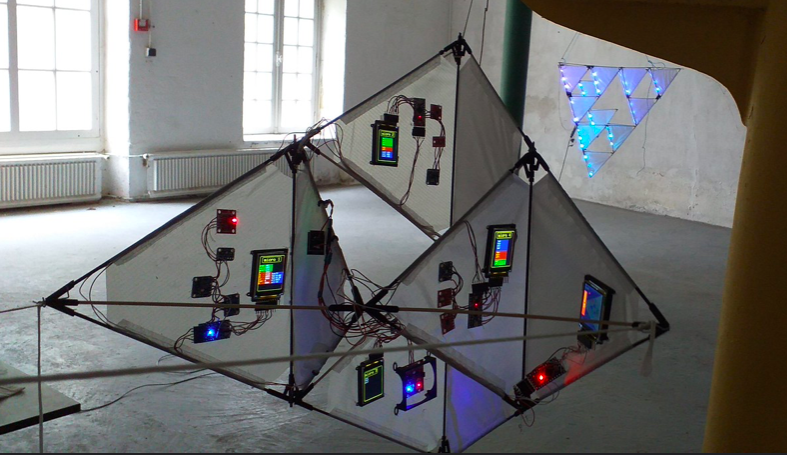 A kite with four networks of sensors attached to Pro Mini's with LCD's, reporting their data to a 5th Pro Mini (the boss microcontroller). All programmed in the Arduino IDE. In the background a kite with neopixel, currently programmed in the Arduino IDE using a ATmega328 board with RF12 - wireless, but this could be done even with an Adafruit Circuit Express, ItsyBitsy M4, BBC Microbit (BLE for sending and receiving data). 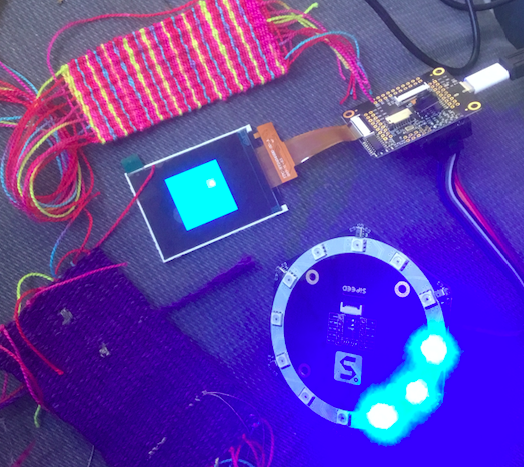 The mic_array, with the Maix Dock, display and camera, conveniently programmed with MicroPython

More about the special boards like the Maix Dock in SpecialBoards